A big deal with Heartland Institute was global warming. I highlighted the phrase because, as all know by now, it has a special meaning. The term has come to represent the apparent fact that human activities are causing a precipitous warming of Earth’s atmosphere and oceans. More specifically, the burning of fossil fuels is causing an increase in the concentration of carbon dioxide in the atmosphere, causing the atmosphere to more effectively trap solar energy. The consequences range from melting of polar ice, which will result in a devastating rise in sea levels—not so devastating maybe to Orlando, Florida, which promises to become a seaside resort—to possible crop damaging climate change. Mitigating action seems to indicate reduced use of fossil fuels, an action opposed to those who own stock in the industry.

Heartland Institute to the rescue. To counter the findings of researchers in the field Heartland engages in various practices to dissuade the voting public from accepting these findings. Desmoglog obtained pilfered internal Heartland documents and heartlessly exposed the contents:

Internal Heartland Institute strategy and funding documents obtained by DeSmogBlog expose the heart of the climate denial machine – its current plans, many of its funders, and details that confirm what DeSmogBlog and others have reported for years. The heart of the climate denial machine relies on huge corporate and foundation funding from U.S. businesses including Microsoft, Koch Industries, Altria (parent company of Philip Morris) RJR Tobacco and more.

We are releasing the entire trove of documents now to allow crowd-sourcing of the material. Here are a few quick highlights, stay tuned for much more.-Confirmation that Charles G. Koch Foundation is again funding Heartland Institute’s global warming disinformation campaign. [Update: Apparently even the Koch brothers think the Heartland Institute’s climate denial program is too toxic to fund. On Wednesday, Koch confirmed that it did not cut a check for the $200K mentioned in the strategy memo after all. A statement released on KochFacts.com and the charleskochfoundationfacts.org states that “…the Charles Koch Foundation provided $25,000 to the Heartland Institute in 2011 for research in healthcare, not climate change, and this was the first and only donation the Foundation made to the institute in more than a decade. The Foundation has made no further commitments of funding to Heartland.”]

That link is critical not so much for its negative finding of Koch support as for its links to the purloined Heartland documents. Here is a typical excerpt:

Given the increasingly important role the Heartland Institute is playing in leading the fight to prevent the implementation of dangerous policy actions to address the supposed risks of global warming, it is useful to set priorities for our efforts in 2012. This document offers such a set of priorities. I propose that at this point it be kept confidential and only be distributed to a subset of Institute Board and senior staff. More details can be found in our 2012 Proposed Budget document and 2012 Fundraising Strategy memo. In 2012 our efforts will focus in the following
areas:

Our climate work is attractive to flinders, especially our key Anonymous Donor (whose contribution dropped from $1,664,150 in 2010 to $979,000 in 2011 – about 20% of our total 2011 revenue). He has promised an increase in 2012 – see the 2011 Fourth Quarter Financial Report. We will also pursue additional support from the Charles G. Koch Foundation. They returned as a Heartland donor in 2011 with a contribution of $200,000. We expect to push up
their level of support in 2012 and gain access to their network of philanthropists, if our focus continues to align with their interests. Other contributions will be pursued for this work, especially from corporations whose interests are threatened by climate policies.

Development of our “Global Warming Curriculum for K-12 Classrooms” project.

Principals and teachers are heavily biased toward the alarmist perspective. To counter this we are considering launching an effort to develop alternative materials for K-12 classrooms. We are pursuing a proposal from Dr. David Wojick to produce a global warming curriculum for K-12 schools. Dr. Wojick is a consultant with the Office of Scientific and Technical Information at the U.S. Department of Energy in the area of information and communication science. His effort will focus on providing curriculum that shows that the topic of climate change is controversial and uncertain – two key points that are effective at dissuading teachers from teaching science. We tentatively plan to pay Dr. Wojick $100,000 for 20 modules in 2012, with funding pledged by the Anonymous Donor.

It’s difficult to read through this without getting the idea that Heartland has left the field of public relations and image building and has entered the realm of advocacy. The problem with advocates of a flawed cause is they can come to believe their own stuff. Another danger is that when you abandon science and reason you no longer have science and reason working for you. That is apparently what happened with Heartland and is the root to a disastrous campaign they launched in early 2012.

It really is hard to know where to begin with this one. But let’s start with: “What on earth were they thinking?”

I’ll let its own press release for its upcoming conference explain, as there’s simply no need to finesse it further:

Billboards in Chicago paid for by The Heartland Institute point out that some of the world’s most notorious criminals say they “still believe in global warming” – and ask viewers if they do, too…The billboard series features Ted Kaczynski, the infamous Unabomber; Charles Manson, a mass murderer; and Fidel Castro, a tyrant. Other global warming alarmists who may appear on future billboards include Osama bin Laden and James J. Lee (who took hostages inside the headquarters of the Discovery Channel in 2010).
These rogues and villains were chosen because they made public statements about how man-made global warming is a crisis and how mankind must take immediate and drastic actions to stop it.
Why did Heartland choose to feature these people on its billboards? Because what these murderers and madmen have said differs very little from what spokespersons for the United Nations, journalists for the “mainstream” media, and liberal politicians say about global warming. The point is that believing in global warming is not “mainstream,” smart, or sophisticated. In fact, it is just the opposite of those things. Still believing in man-made global warming – after all the scientific discoveries and revelations that point against this theory – is more than a little nutty. In fact, some really crazy people use it to justify immoral and frightening behavior.

But then comes the best bit:

Of course, not all global warming alarmists are murderers or tyrants.

Don’t bother trying to follow the link to the Heartland press release. It is long since void.

My point: When you abandon reason, reason is not available to you when it can best benefit you.

This has been out since early 2012, but I only caught sight of it this week on somebody’s Facebook feed. When I saw this I blinked twice and responded, “Does Kaczynski still believe in gravity?”

Others have not been so kind. The reaction was swift and deadly. Other billboards were crafted, if not actually erected. Some were humorous:

Some were right out of Comedy Central: 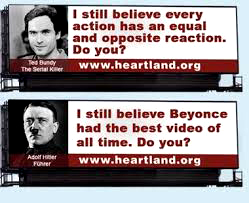 Some were classics in irony:

Some were a tad cruel:

Some were excessively cruel:

The fallout from Heartland’s disastrous billboard campaign may have been fatal:

The ultra-conservative Heartland Institute admitted it was in financial crisis on Wednesday, with the flight of corporate donors making it difficult to pay staff or cover the costs of its annual conference aimed at debunking climate science.

In a speech at the close of this year’s climate conference, Heartland’s president, Joseph Bast, acknowledged that a provocative ad campaigncomparing believers in human-made climate change to psychopaths had exacted a heavy cost.

However, Bast also attributed Heartland’s current problems to his weakness in financial management.

“These conferences are expensive, and I’m not a good fundraiser so as a result I don’t raise enough money to cover them. We really scramble to make payroll as a result to cover these expenses,” Bast said.

People who know me know that I am an advocate of the science behind global warming. It makes sense, it’s based on serious research conducted by professional scientists, it’s the consensus of scientists working in the area, it’s solid science, it’s factual. Conversely, the supposed science detracting from the scientific consensus is misbegotten, fatally flawed, erroneous, deceitful, conceived in malice and largely purchased by people with political or economic interests. Heartland Institute is the exemplar of the opposition to the scientific consensus. Where they are not devious they are then clueless. Do not deceive yourself that you can deny the science of global warming without signing onto the likes of Heartland Institute. Opposition to the scientific consensus has nothing going for it besides Heartland thinking and other barren fields of human endeavor.