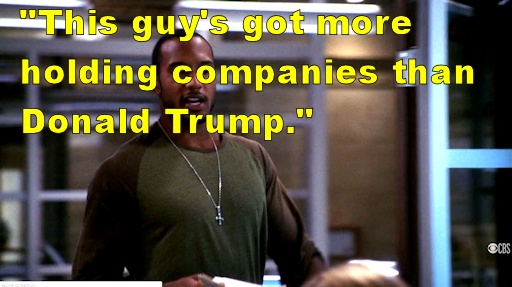 So I’m binging a re-run TV series on Hulu. It’s Shark, featuring James Woods as a nearly ethical Los Angeles County prosecutor. In one episode his team is investigating the possibility a lecherous doctor has murdered one of his patients. So the team’s investigator (Henry Simmons) enters with a stack of paperwork he has pulled on the good doctor. He announces:

This guy’s got more holding companies than Donald Trump.

More holding companies than Donald Trump? Now that is funny.

One thought on “Friday Funny”