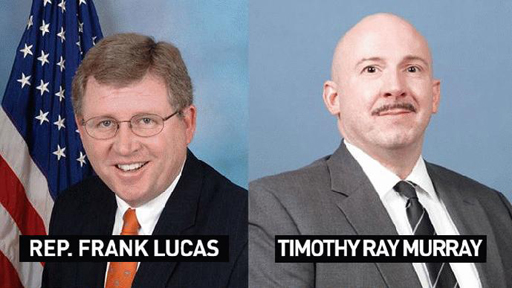 I try not to make this stuff up. Usually I don’t have to. For example:

The loser in a recent Republican primary is claiming that his opponent, Oklahoma Representative Frank Lucas, is unqualified for office because he has been replaced by a robot.

Timothy Ray Murray posted a press release — addressed to “News Person” — in which he demanded the Oklahoma Board of Elections shift votes from Rep. Lucas to him on account of the fact that “it is widely known Rep. Frank D. Lucas is no longer alive and has been displayed [sic] by a look alike.”

Mr. Murray posted the following on the Tim Murray for Congress for Oklahoma’s 3rd District site:

The election for U.S. House for Oklahoma’s 3rd District will be contested by the Candidate, Timothy Ray Murray. I will be stating that his votes are switched with Rep. Lucas votes, because it is widely known Rep. Frank D. Lucas is no longer alive and has been displayed by a look alike. Rep. Lucas’ look alike was depicted as sentenced on a white stage in southern Ukraine on or about Jan. 11, 2011.

This is a situation similar to the Senators’ from Kentucky situation in the 2012 election. I am contesting that this matter has happen since his election was blocked, because of the U.S. Defense Department’s use of Mr. Murray’s DNA. To my knowledge, the U.S. Defense Department has not released to the public that information, as it is their confidential information about many people. Congress is likely wanting me to state that all my DNA used will not result in benefits to people I have never had relations with of a family nature. I have been bound to protect that information unless it causes harm to The People.

The contest of election and or petition will be correctly filed with county election boards and with federal offices. I, Hon. Mr. Timothy Ray Murray, fully meet all Constitutional, Federal and Oklahoma requirements for election and for holding Office if the voters’ results show that is the case.

This is fascinating at so many levels. Let’s start with “Rep. Lucas’ look alike was depicted as sentenced on a white stage in southern Ukraine on or about Jan. 11, 2011.”

People, I can’t even figure out what is meant by “sentenced on a white stage.” Can somebody clue me in? I had to resort to the Internet to search for similar uses, and none of my sources provided the slightest clue.

The Washington Post also clicked on The Manchurian Candidate connection. Only, they were a lot quicker than I was:

That was the headline. The article added:

“A lot of stupid things happen in Oklahoma politics,” says Keith Gaddie at the University of Oklahoma, “but this may be the stupidest I’ve ever heard. Welcome to Oklahoma.” (At the end of our phone call, Gaddie asked that I make sure the word “stupid” appeared in his quote.)

The movie is based on on a novel by Richard Condon. I previously reflected on the The Manchurian Candidate in a post about modern day politician Allen West. But that was so two years ago. This is fresh stuff.

If you think Oklahoma voters were stunned, consider the plight of Congressman Lucas:

“Many things have been said about me, said to me during course of my campaigns. This is the first time I’ve ever been accused of being a body double or a robot,” said Rep. Lucas.

The congressman was holding back in that statement. Inside he must have been jumping with joy. “Look at the loonies I have to campaign against.” Those are my words, but I further observe: If there be loonies, then make the most of them. As it is the congressman has some issues of his own:

It has been almost two years since the horrific Benghazi terrorist attack occurred, taking the lives of four innocent, brave Americans; however we continue to seek answers from the Administration on what took place that day.

Since 2012, House committees have worked tirelessly to investigate the tragic attack, and they have uncovered many facts. Unfortunately, while House Republicans continue working to seek justice, the Obama Administration continues stonewalling. To make matters worse, it was recently revealed that the White House withheld information regarding Benghazi from Congressional investigators. It causes me grave concern to know the White House refuses to assist and provide pertinent information regarding an attack that killed four of our fellow citizens.

Take a deep breath, readers. Now let it out. We have dodged one of the bullets headed our way. Frank Lucas trounced Tim Murray 82.8% to Murray’s 5.2%. Will this sanity never end?

One thought on “Manchurian Candidate”