Yesterday I posted an item A Creationist at the SBOE Hearings. Today is the same topic, only I’m going to pick up on some stuff I didn’t cover before, because I was really spending too much time on the computer.

Yesterday was about creationist Ray Bohlin’s presentation at the State Board of Education hearings last week. I made a video, and I posted some of it. The remainder of the video has some interesting stuff I left out. Here is some more. 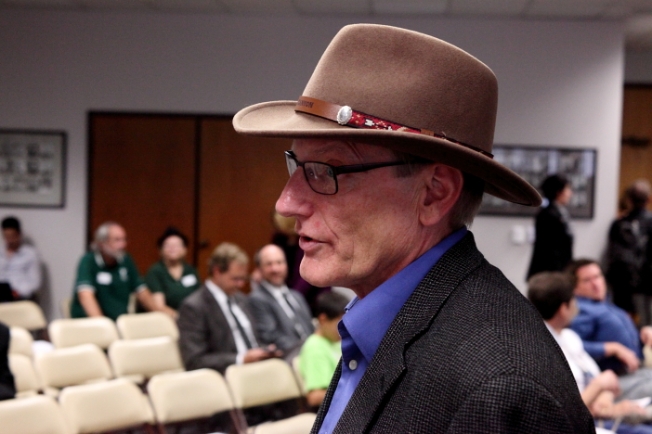 [Apparently SBOE chair Barbara Cargill] tells Bohlin that she appreciates his contribution to the review process, and she asks him what degrees he holds. This has got to be rich. As sure as it’s going to be hot in San Antonio today Barbara Cargill already knows about Bohlin’s degrees, because she worked to get him and other creationists on the biology review panels. “I’m one of you.” But she had her agenda for the day, and part of it was to defend the creationists and to show up the evolutionists. For the record, Ray Bohlin holds a Ph.D. in molecular biology from the University of Texas at Dallas, along with other degrees in science.

Cargill agrees that Bohlin is very qualified to serve on the review panel, and she states she is “very protective” of the volunteers. I could add, “the creationist volunteers,” but then I would be prosecutorial. She goes on to express her concern that the process was supposed to be evaluating the text books and instructional material, but now we see the evaluators being evaluated. Sacrebleu!

OK, let me get this straight. Barbara Cargill worked the machinery to get creationists other anti-science types on the review panels. Then some people pointed this out and notified the public that these people were being placed on the panels to review educational material for the public schools. Then these creationists reviewed the course material and from time to time placed factually deficient comments on the review forms in their attempts to discredit certain fields of legitimate science. Now people are complaining about that, and Barbara Cargill is shocked. Shocked! Sacrebleu!

Let me give you an analogy:

The next voice is that of my own representative on the SBOE, Ken Mercer of District 5 (San Antonio).

I just want to ask again, because this has been… It really hurts me, because we try to get people to be reviewers, and they’re having their comments [from the preliminary rounds] published…

Mercer goes on to complain:

And now they’re fearful for their jobs.

The Board is trying to get people to be reviewers, and they couldn’t get enough reviewers from all the public school teachers and university professors to take the positions? Really? I was on the physics review panel, and we did not seem to any trouble getting people to review those books. And nobody was recommending that objections to the theory of quantum mechanics be taught, as well.

When it comes to people fearful of losing their jobs, I am sure Mr. Mercer is not talking about Ray Bohlin, because Ray Bohlin is not fearful for his job. He heads up Probe Ministries out of Plano, Texas, and he has been doing his job to the best of his ability to discredit the science behind evolution and climate change. We also know the other creationists on the review panels are not fearful of their jobs. Ide Trotter is founder of Trotter Capital Management Inc. and is a well-known creationist. Walter Bradley “is on the selection committee for the Trotter Prize, which rewards work on intelligent design.” All three of these have spoken publicly on their positions on evolution, positions they brought with them when they volunteered to review biology texts.

There’s more. From the Texas Freedom Network I learned that Richard White was also scheduled to review biology text books.

Richard White, a systems (network) engineer in Austin, testified at an SBOE hearing on the proposed science curriculum standards on March 25, 2009. At the time, he advocated the inclusion of phony “weaknesses” of evolution in Texas science standards.

I am guessing that with his previous testimony before the SBOE Richard White has been effectively outed as a creationist. Will somebody please give me a nickel for every software engineer, network administrator who is an avowed creationist. I need to take a vacation in Acapulco. None of these people, to my knowledge, have ever lost their job because their bosses found out they were creationists. I once had a Young Earth Creationist working for me, and he did not lose his job, although I was subsequently reluctant to trust his judgment in other matters. David Coppedge was one such who claimed he lost his job because of his “religious convictions” because he was advocating Intelligent Design to his co-workers. A court has thrown out his wrongful termination suit against JPL.

David Zeiger is a seventh-grade teacher at a Christian private school in North Texas. He holds a biochemistry degree from the University of Texas at Dallas. In 2009 he and his wife, Heather, opposed removing from the state’s science curriculum standards the requirement that students learn about so-called “weaknesses” of evolution. Creationists has [sic] used that requirement to insist that publishers include discredited arguments challenging evolution, such as supposed “gaps” in the fossil record. We don’t know whether Zeiger is participating the review panels this week.

It is doubtful David Zeiger will lose his job at a Christian private school for opposing evolution.

Daniel Romo is Professor of Chemistry at Texas A&M University. His BA is from Texas A and M and his Ph.D. is from Colorado State University. His postdoc [sic] is from Harvard.

My opinion: One way to get outed as a creationist is to comment against evolution in the text book review process. Another, and even better, way is to get listed in the Creation Hall of Fame.

I just want to ask again, because this has been… It really hurts me, because we try to get people to be reviewers, and they’re having their comments [from the preliminary rounds] published…

And now they’re fearful for their jobs.

Methinks the gentleman doth protest too much.

Ken Mercer may have a point, however. A publicly elected official who professes ignorance of modern science (and is proud of it) could be in danger of losing his job. I, for one, vow to never vote for him again. Wait! I didn’t vote for him last year. OK, not only will I not vote for him, I will give money to whoever runs against him. Talk about a self-fulfilling prophecy!

I just love it. Ken Mercer went on about needing to believe, not just preach and teach, but believe in evolution to keep your job. “It became almost like a religious test,” he went on. So, people are losing their jobs because they don’t believe in evolution? Really? Jesus! The courts must be clogged with wrongful termination suits. Just look how long David Coppedge’s case went on. And he was not even a public school teacher. Has anybody noticed recently how much effort it takes to fire a public school teacher?

Just for fun, I’m going to set that aside for a moment. Suppose not believing in the science behind natural evolution or the science behind climate change were ever used as a reason for termination. Would that be reasonable? Are there comparable situations? Let me pose an example.

Coming to work with your fly unzipped would not keep you from teaching good science, and it may not even be illegal. But how many times would a teacher (software engineer) have to do this before his boss called him around to talk things over? My point? Missing the facts behind natural evolution and the science behind global warming is the intellectual equivalent of going around with your fly unzipped. It demonstrates to all who will observe that there is something missing in your personal makeup.

Creationists may claim this is an unfair comparison, but they need to step back and look at this from the viewpoint of the real world. The real world does not hold to reincarnation, snakes that can talk and magical, yet invisible, people who go around tinkering with nature to make things come out in favor of a select world view. And neither should people in responsible positions in public education.